Aqua Marina had a real good year with its outstanding iSUPs line. This brand keeps on putting amazing efforts and dedication towards their name; it’s a responsibility they respect and carry out to build the best iSUPs possible for all the people who chose an inflatable over a hard one.

The wide iSUPs’ range produced by Aqua Marina made it possible for everyone to find their most suitable board and hit the water for their favorite water sport.

The Echo is one of Aqua Marina’s most popular iSUPs, and we’re taking a closer look at it so that you can see what kind of a board is it and get to see everything that’s featured on it.

To begin with, the Aqua Marina Echo is 10.6 feet long which is a really good number that works perfectly fine for riders of different sizes. This board is something between medium and large, and that makes it quite a versatile iSUP.

Moving on, this board is 32 inches wide; it’s as wide as most quality iSUPs can get. You might find a board that’s one or two inches wider which is definitely a plus, however, you can’t go wrong with a 32″ wide iSUP.

Now in terms of thickness, the Echo got 4 inches. It’s not bad at all for a board of its size especially that it’s meant to be light and fast.

The Aqua Marina Echo, just like its ancestors and fellow iSUPs by Aqua Marina, is build using military-grade PVC material which is enough to make any inflatable product a hard and stiff piece of art. If you happen to see this board laid on the ground without being told that’s an inflatable, you’d probably have a hard time figuring it out.

Premium drop stitch is also used to make this board’s inner core; this technology is known to making any iSUP very stiff, yet, lightweight. It also makes sure the board is in its best final shape once fully inflated. The Echo looks like one single piece thanks to how perfectly and precisely the parts were glued together.

I wouldn’t say that you can go completely wild on the Echo because simply, an inflatable product needs a little more maintenance than its hard rivals. Thus, it would cost nothing to be a friendly user.

The thing about most of Aqua Marina’s 2019 iSUPs is that they come in packages without a featured paddle. It’s kind of a bummer, but let’s not let it get to us because these boards are worth it eventually.

The Aqua Marina Echo comes with a nice package that includes:

The fact that the Aqua Marina Echo is only 4 inches thick may result in the board submerging underwater a little under heavy load, but once a smaller rider got on it there was no such a thing. Thus; with a weight capacity of 254 lbs; it is better not to hit the weight limit in order for it to deliver its best performance.

Regardless, this board is a very sturdy one that would do a great job helping entry-level riders to come through stand up paddling easily secured and balanced even if it’s their first attempt.

Gliding and tracking are really nice on the Echo; however, it’s by no means a fast board. That’s why it is best used for recreational paddling, touring and fitness if necessary.

Being in the water; controlling the Aqua Marina Echo comes to you almost effortlessly thanks to its slim and responsive body, and that makes it a great board to be used in flat water or to catch some small waves. 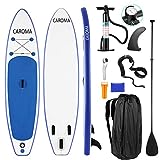 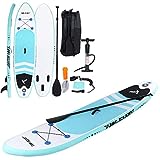 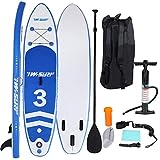